Home » News » Ask Your Calgary Plumber: Should I Save on the Kitchen Faucet?

They’re always out there: flyer deals from your local chain hardware store advertising kitchen faucets for $50-100. Great deal! Right? They look good and it’s just a faucet, so why not save where you can?

The truth is, a kitchen faucet has farther reaching implications than you’d expect. The kitchen tap is the most important tap in the house. Think about it. The kitchen tap gets turned on and off countless times over the course of a day. It’s tied in to the garburator and the dishwasher. If it were to fail it would be of far more consequence than any bathroom tap. 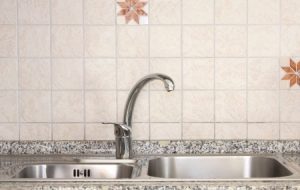 Not only that, but it’s surrounded by some of the most expensive finishes in the home. Kitchen renovations represent a huge investment and the kitchen is the area where friends and family gather. The potential damage caused by a low-quality kitchen tap undermines the functionality and safety of and also the investment in your kitchen fixtures.

What’s So Bad About a Cheap Kitchen Faucet?

These inexpensive taps that seem like a great deal are problematic because they create the idea that this is what a kitchen tap should cost. Meanwhile, they are often not even CSA-approved. They don’t meet the minimum standard of what’s being installed in Canadian homes. This means that they may leak or fail, even though they look nice.

When the tap leaks, you may not see the leak and the water might be going down behind the cabinet, which, over time, will swell the MDF of the cabinet and can destroy expensive countertops like granite. A less dire situation would be the moisture collecting in and warping of the MDF. This doesn’t represent the cost that a cracked counter would, but it’s still costly and inconvenient. All that money you saved on your tap? It’s more than eaten up by the repairs its failure has necessitated.

So what to do? Spend the money to buy a CSA-stamped kitchen tap, from a knowledgable plumber. Look for a trusted brand. Check whether your plumbing professional is a certified journeyman, and trust their advice. You can save money on other taps in the house. Saving on the kitchen tap is not worth the trouble.

We are highly rated Calgary Plumbers. Based in Calgary, we also serve the surrounding areas. We ae you local Heating and Cooling experts.